IMPORTANT NOTE: All inventory of "Touch-Tone Terrorists - Appetite for DisRuption" CD's inside shrink wrapped jewel cases with paper tray card inserts has sold out for good. There is still an excess inventory of bulk stacked CD's only. These are brand new CD's that are sold inside of plain protective paper sleeves exclusively via this website. These are the same exact professionally manufactured CD's that were sold inside of the jewel case product. 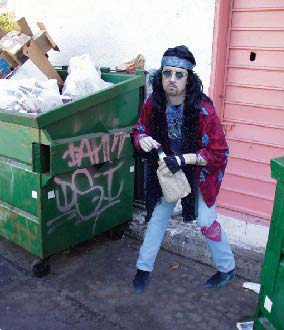 QUESTION: WHY AREN'T YOU REMANUFACTURING? Digital sales is taking over. Very few people order CD's anymore. We sell about 30 digital downloads for every 1 physical CD. Note that major labels are also abandoning the CD format in favor of digital downloads via iTune and Amazon. Not only do record labels have a higher profit margin on digital album sales but the consumer saves a lot of money by paying about 25% less for the digital album AND doesn't not have to pay for shipping. 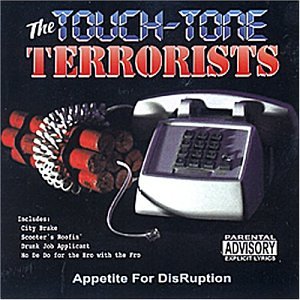 OVERVIEW: The debut TTT CD features "Drunk Job Applicant". Originally WKLH (Milwaukee) aired this call and got a HUGE response from listeners. Subsequently 30 stations requested the CD to air. But actually the favorite tracks are the SCOOTER CALLS: "City Brake", "Scooter's Transmissions", and "Scooter's Roofing". Manqueer (Chicago) aired many calls off this CD without ever telling listeners WHO did the calls! "Ho De Do for the Bro With the Fro" was very popular on WEGR (Memphis). Overall these calls are more light-hearted, in that callers wind up being amused or amazed to death.

Power Outage - Junkyard Willie clashes with his old lady as an electrician listens in amusement.

Landfill - A first: Willie wants to GET garbage from a landfill.

Asbestos Chef - Willie has been using asbestos as a salt replacement. He calls an asbestos abatement company to find out if what he heard from his friend Bubba is really true (that asbestos gives you the hee bee jee bees).

Kelsey's Liquor Store - Liquor Store owner absolutely INSISTS on delivering booze to an alcohol and drug rehab hospital. He clashes with a nurse.

Airplane Hubcaps - Junkyard Willie calls an aircraft maintenance company to try to sell something that doesn't' even exist: Airplane HUBCAPS!

Auto Dealership Dispute - The MAN has ripped off the back man again. But "Clarence Washington" won't have any of that! He wants a $500 refund. Sales rep gets an earfull!

"Liquor for Louie" Old man Louie calls up a liquor store to get some BOOZE delivered to his HOSPITAL room! Does this sound like a logistics nightmare? Louie suggests that (to avoid arrest) the man at the liquor store could put on a NURSES OUTFIT. Then he demands "I need booze and a young broad!" For a senior citizen Louie sure has great taste!

"Drunk Job Applicant" AS HEARD ON RADIO MORNING SHOWS ACROSS AMERICA: 60's Burn Out BLADE calls up DRUNK to inquire about a JOB! Who would want to hire this guy! After spilling out his PATHETIC life story to the boss on the phone, BLADE spills out some grain alcohol filled VOMIT. This call is disgusting yet somehow tearfully hysterical!

"Ho De Do" Hold the door for the bro with the fro at the liquor store. Fast talking Clarence Washington must be high on something. Liquor store clerk gets baffled but stays on the phone.

"Heavy Metal Hotel Destroyers" Big shot band manager Stu Jaimison calls to book a reservation for a rowdy rock band that needs about 10 or 12 EXTRA TV's in ONE ROOM. Why? Because "They always seem to lose a few out the window". Better keep 'em happy though because they might get agitated and "TORCH the place" or "flush a pipe bomb down the toilet" like they did once at the Bed & Breakfast.

"Retirement Home" Old man Louie explains to a woman at the retirement home that he has wondered off a little TOO far. He's at a night club called "LIVE NUDE GIRLS"! The woman on the phone declares "Well, that is a strange place for YOU to be!" To complicate matters his colostomy bag is FULL! Now he needs a ride back home and someone to keep supper warm.

"Bassist From Woodstock" 60's Burn Out Blade responds to a bassist wanted ad. Never mind his proficiency on bass - With his last band (the Flower Freaks) he used to sneak out into the crowd with a propane torch and set audience members on FIRE. "I'll take (your) band off the DEEP END!"

"Dr. Junkyard Willie, M.D." How on earth did a hubcap salesman all of a sudden become Beverly Hills' most respected gynecologist? Willie openly drops names of famous women celebrities that he claims to have "examinized". "She came in one time with a yeast infection!" So much for keeping patient information confidential.

"Porta-Potty" What appears to be a sanitation nightmare is actually true love! Junkyard Willie's bright idea for his wife's birthday present is a Port-a-Potty gift wrapped and set up in the LIVING ROOM. Years of sharing a bathroom with his "old lady", has apparently driven Willie to the EDGE! Are you ready for some bathroom humor? 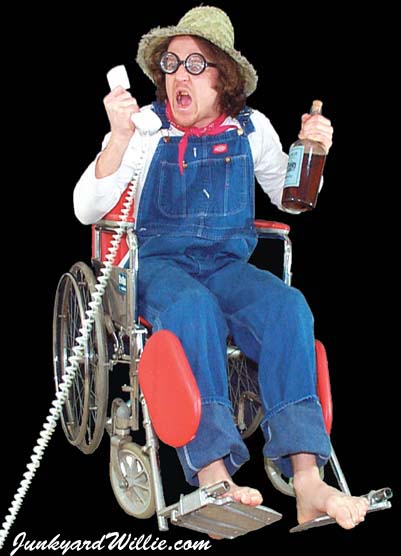